Sustaining Scandinavian Folk Arts in the Upper Midwest
In my current position I spend a little bit of time teaching, a little bit of time researching, and a whole lot of time putting together public programming. From short documentary films to three-day long conferences, from concerts on campus to presentations throughout the Upper Midwest, from a workshop series on documenting local traditions to public lectures on metal music in Norway and sustainability in Sápmi, I spend my time working to ensure that the amazing things happening throughout the region are made available to a wide audience. Check out what my coworkers and I have done at our project website for Sustaining Scandinavian Folk Arts in the Upper Midwest.

In the meantime, I continue to conduct research with Nordic-Americans throughout the Upper Midwest, work extensively with Indigenous communities, and listen to Bruce Springsteen.

The Life and Times of a Swedish Immigrant: Signe Aurell’s Working Words
In the early 1900s, Swedish women immigrants to the US created communities through socially engaged actions, particularly in support of temperance and labor movements. Through writing and reading, these highly literate Scandinavian women reported, educated, and encouraged one another, openly and honestly creating a record of their working-class immigrant experiences, largely overlooked until now. My dissertation focused on a singular yet representative Scandinavian immigrant woman, Signe Aurell, a Swedish laundress, labor activist, poet, and translator. Her life and work in the US and after returning to Sweden exemplify, chronicle, and reflect upon not only the lived experiences of fellow migrant women workers, but also the challenges confronting social critics and visionary activists.

As a folklorist, I am focusing on vernacular expressions, especially poetry and prose in Swedish-language left-wing newspapers in the US as well as the letters which were sent back to Sweden from the US. I’m finding myself working at an intersection of folklore, history, and literature. Signe Aurell, who lived in Minnesota between 1913 and 1920, published poetry in several left-wing Swedish-language newspapers, including IWW newspapers. While still living in the US, Aurell was also publishing in left-wing Swedish newspapers. With Aurell as an example of women immigrants who were labor activists, I am examining the role of work, the vernacular expression about work, and the way in which they come together to form a sense of community in the US and a place in which these women create an identity.

For a full listing of my publishing record and conference presentations, please click here.

For more information about my work in sustainability, translation, or writing, please click on my portfolio.

Photo of Signe Aurell from issue #8 of Bokstugan in 1920 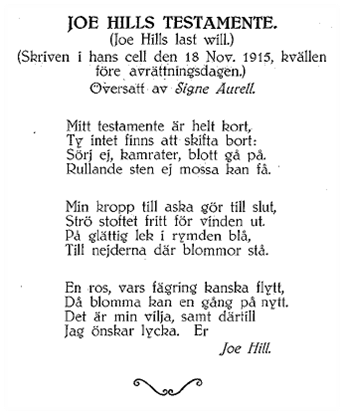